At least 600 civilians were killed during an attack in northern Ethiopia in early November because of their ethnicity, a state-appointed human rights commission said Tuesday.

In its preliminary report into the November 9 massacre at Mai-Kadra, a town in the Tigray region, the Ethiopian Human Rights Commission (EHRC) said an informal group of Tigrayan youths, aided by local officials and police, “carried out door-to-door” raids, killing hundreds they identified as ethnic “Amharas and Wolkait.”
The EHRC, which describes itself as an “independent national” institution, accused the group, along with local Tigrayan militia and police security, of committing “war crimes” and “crimes against humanity” before they retreated from the advance of the Ethiopian Defense Forces (EDF).
“The unimaginably atrocious crime committed against civilians for no reason other than their ethnicity is heartbreaking,” said EHRC chief Daniel Bekele in a statement. “It is now an urgent priority that victims are provided redress and rehabilitation, and that perpetrators involved directly or indirectly at all levels are held to account before the law.”
The attackers destroyed and looted homes while using knives, machetes, hatchets and ropes to butcher or strangle victims, the EHRC said. Witnesses also told the EHRC that other residents of ethnic Tigrayan origin saved lives by hiding people in their homes, churches and fields.
Witnesses to the massacre also told CNN and Amnesty International that Tigrayan officials were behind the attack and that they targeted ethnic Amharas. The region’s ruling party, the Tigray People’s Liberation Front (TPLF), have not responded to CNN for comment.
There have also been reports of atrocities committed by federal forces since Ethiopian Prime Minister Abiy Ahmed ordered air strikes and a ground offensive against Tigray’s rulers for defying his authority. Tigrayan leaders have accused federal forces of killing innocent civilians while targeting churches and homes.
The federal government has denied targeting civilians previously. It condemned the attack at Mai-Kadra in a statement on Tuesday, blaming the TPLF.
CNN has been unable to verify claims from either parties due to a communications blackout. Internet, mobile phones and landlines are all down, making it difficult to contact those accused in the preliminary report.
The conflict threatens to undo years of progress in Africa’s second most populous country and the restive Horn of Africa region.
On Sunday, Abiy Abiy warned members of the TPLF to surrender “within the next 72 hours, recognizing that you are at a point of no return.” 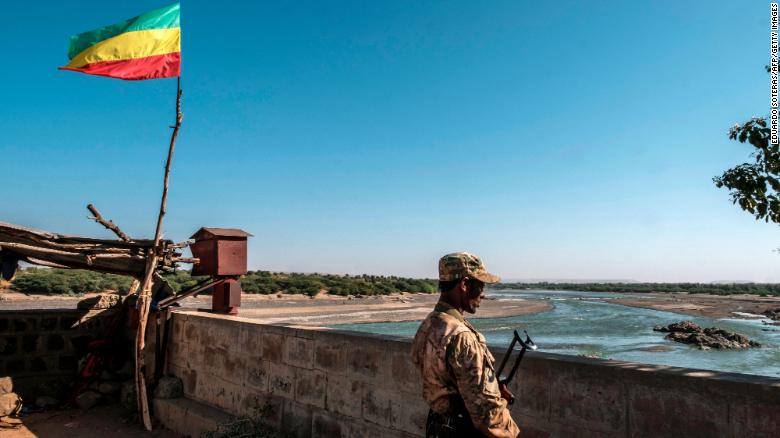 A member of the Amhara Special Forces watches on at the border crossing with Eritrea where an Imperial Ethiopian flag waves, in Humera, Ethiopia, on November 22.
Despite the ultimatum, the TPLF vowed to continue the fight in the north of the country, raising fears of further bloodshed.
“We are not concerned about timing, we are concerned about our final complete success,” said the president of the Tigray region, Debretsion Gebremichael, on Tigray TV Monday night.
Government forces say they are currently closing in on Mekelle ahead of a promised “final phase” of the military operation that includes plans to surround the regional capital Mekelle with tanks.
The UN high commissioner for human rights, Michelle Bachelet, expressed alarm Tuesday at reports of a heavy build-up of tanks and artillery around the city and feared “further violations of international humanitarian law.”
“The highly aggressive rhetoric on both sides regarding the fight for Mekelle is dangerously provocative and risks placing already vulnerable and frightened civilians in grave danger,” Bachelet said in a statement. 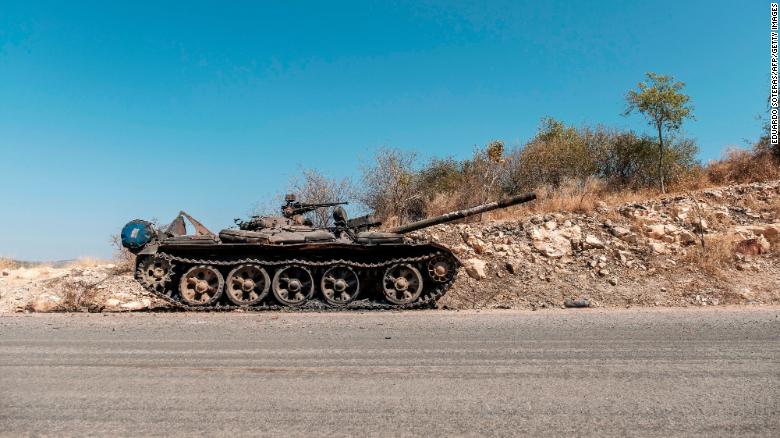 A damaged tank stands abandoned on a road near Humera, Ethiopia, on November 22, 2020
Hundreds have died and more than 40,000 refugees have fled to neigboring Sudan since November 7, according to the Office of the United Nations High Commissioner for Human Rights (OHCHR). Humanitarian organizations are struggling to provide services amid the tsunami of refugees.
“The response is scaling up, but the influx of arrivals is outpacing the capacity on the ground and additional funding is urgently needed,” said the spokesperson for the UN Secretary-General, Stéphane Dujarric, in a press briefing on Monday.
The conflict has spread to Eritrea, where the TPLF has fired rockets, and also affected Somalia where Ethiopia has disarmed several hundred Tigrayans in a peacekeeping force fighting al Qaeda-linked militants.
CREDIT: CNN AFRICA

AG BABY AND SIMI GUSH PRAISES AT EACH OTHER ON 2ND...