Ethiopian President Sahle-Work Zewde has granted pardon to more than 4,000 prisoners in an effort to contain the spread of coronavirus.

Sahle-Work Zewde announced the order in a tweet on Wednesday and said it would help prevent overcrowding in prisons.
The directive only covers those given a maximum sentence of three years for minor crimes and those who were about to be released from jail, she said.
There are 12 confirmed cases of Covid-19 in Ethiopia, the World Health Organization said Wednesday.
Authorities in the nation have put in place a raft of measures, including the closure of all borders except to those bringing in essential goods to contain the virus. The government has directed security officials to monitor and enforce a ban on large gatherings and overcrowded public transport to ensure social distancing. 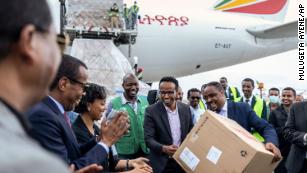 Rwanda’s Paul Kagame thanks Jack Ma for ‘huge shot in the arm’ after receiving donation of test kits
Ethiopia launched a National Resource Mobilization Committee to pool funds and nonfinancial resources in preparation for a “worst-case scenario,” according to a statement shared by Prime Minister Abiy Ahmed on Twitter.
“This is the time to redirect our energy from panic, fear and worry towards purposeful contribution by pooling whatever resources we have for a national emergency stockpile,” the statement read.
Abiy is also overseeing the distribution of millions of coronavirus diagnosis and prevention kits donated by Chinese billionaire Jack Ma to 54 African countries.
There are now more than 1,800 confirmed cases of the novel coronavirus in 39 countries on the continent, according to the WHO figures.
Source: CNN Africa

More Than 200 Prisoners Escape From Jail in Uganda

IMF to disburse $1bn to Angola to address COVID-19 crisis

Youths, CSOs, others condemn House of Reps attempt to take over...

CELEBRATION AS CONJOINED TWINS WERE SEPARATED SUCCESSFULLY IN ABUJA