Pro-democracy politicians in Hong Kong have resigned en masse after four of them were expelled from the territory’s parliament under a Chinese law banning supporters of independence from holding office.

Authorities in Hong Kong said in a statement the four legislators – Kwok Ka-ki, Alvin Yeung, Dennis Kwok and Kenneth Leung – were banished from the assembly for endangering national security.

The 19 members of the opposition earlier said they would resign in protest and confirmed they would submit letters of resignation on Thursday.

The banning of the four followed meetings of China’s National People’s Congress Standing Committee on Tuesday and Wednesday.

The committee passed a resolution to disqualify those who support Hong Kong’s independence or refused to acknowledge China’s sovereignty over the city, China’s official Xinhua news agency said

Asking outsiders to interfere in the region’s affairs is also prohibited under the new law, as is any act that threatens national security.

Wu Chi-wai, convener of the parliament’s pro-democracy group, said at the news conference: “Today we will resign from our positions, because our partners, our colleagues, have been disqualified by the central government’s ruthless move.

“We are facing a lot of difficulties in the coming future for the fight of democracy, but we will never, never give up.”

At a news conference confirming their disqualification, Dennis Kwok said: “From our point of view this is clearly in breach of basic law and our rights to participate in public affairs, and a failure to observe due process.” 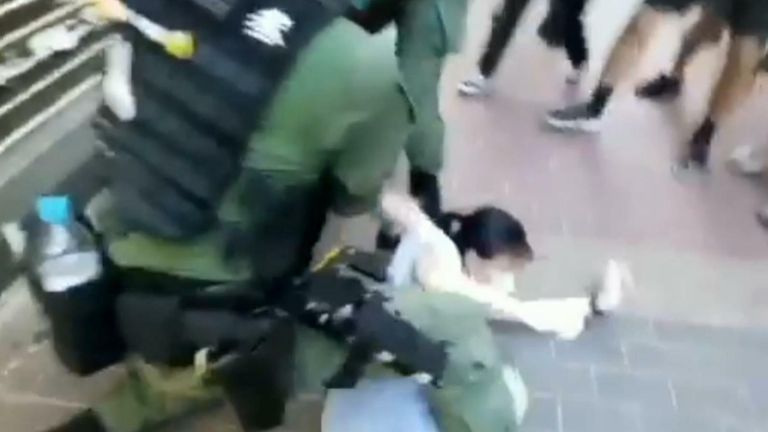 Carrie Lam, Hong Kong’s chief executive, backed Beijing’s stance, saying anyone who couldn’t uphold the law and pledge allegiance to Hong Kong should be disqualified as a legislator at a briefing on Wednesday.

Wang Wenbin, a spokesperson for China’s Ministry of Foreign Affairs, said it was necessary to maintain the rule of law and to keep to and improve the “one country, two systems’ principle”, which defines Hong Kong’s relationship with China.

Hong Kong: What is China’s new security law and why is it controversial?

The mass resignation leaves Hong Kong’s parliament with only pro-Beijing members, who already make up the majority in the chamber.

Elections to the chamber, due to be held in September, were postponed by a year by Ms Lam, who blamed the coronavirus pandemic.

But critics argued she was concerned about the opposition gaining seats after more than 600,000 people took part in an unofficial pro-democracy primary.

Last month, Beijing made it an offence to insult or denigrate its national flag, something which has happened during mass anti-Beijing protests seen in Hong Kong through much of last year.

Demonstrations were initially sparked by opposition to a proposed – and subsequently withdrawn – extradition law but later widened to include demands for greater democracy and criticism of China‘s efforts to tighten control over the former British colony.

The US has withdrawn trading privileges granted to Hong Kong, and other governments – including the UK – have suspended extradition and other agreements in protest at the situation there.

This is, in effect, the end of political opposition in Hong Kong.

The British government has previously warned that Hong Kong’s freedoms were being eroded.

By that measure, this was half the cliff-side falling into the sea.

All opposition members of the Legislative Council, Hong Kong’s parliament, have resigned, after the government disqualified four of its members.

A decree came from Beijing and, with it, the effective end of political opposition in Hong Kong, for the first time since handover in 1997.

The Chinese government ruled today that the region’s government could dismiss any lawmaker judged not to uphold Hong Kong’s law and swear allegiance to the region, without involving the city’s courts.

The four opposition lawmakers had already been disqualified from running in the postponed, upcoming elections for the Legislative Council, for calling on foreign governments to sanction Beijing and Hong Kong.

Hong Kong’s chief executive argued in a press conference today: “It seems illogical to allow people who don’t uphold the basic law nor pledge allegiance to the Hong Kong SAR to continue to be a LegCo member.”

The four disqualified legislators said they would consult their lawyers about a challenge in the courts and they may have a case: The grounds for disqualifying a candidate from elections are not the same as for dismissing a member of the parliament.

But the legal distinction is probably marginal compared to the larger reality: Beijing has control of Hong Kong, and every day that control seems to get tighter.

Without any official political representation, the only other places for opposition is protest.

This year, though, Hong Kong has not seen the mass demonstrations – which often turned violent – of last year.

There are two reasons for that. COVID-19 rules have prevented mass gatherings, even as Hong Kong continues to log daily case numbers in the single digit.

Anyone found guilty of “secession” or “subversion” can face life in prison, and cases can be tried in mainland China.

One Chinese Communist Party cadre described the National Security Law as a “sharp sword” hanging over the city.

Today showed that there are a thousand different ways to make a cut.