Argentina’s president has said there will be three days of national mourning following the death of the country’s most famous footballer.

Diego Maradona, who captained the 1986 World Cup-winning team, died from a heart attack at the age of 60 on Wednesday.

Argentina’s President Alberto Fernandez said: “Diego was Argentina in the world. He gave us joy and we will never be able to repay him for so much joy.”

Mr Fernandez issued a decree for three days of national mourning and offered the presidential palace for the footballer’s funeral.

In Argentina, fans gathered in spots that are linked to the life of the legendary player, including the small home where he was raised in the Villa Fiorito area, and the stadium of Argentinos Juniors, where he started his career in 1976

At the stadium, fans put candles and flowers alongside a wall that surrounded the pitch.

Dante López, a doctor, said: “I am touched. I can’t understand it, I can’t see the reality. Diego will never die, today is the birth of the Maradona myth.”

Also at the stadium was Mariano Jeijer, who said he did not want to be sad at home, adding: “Diego is a symbol of being Argentinian. He is someone that made us very happy”.

At the house, people began painting a mural of Maradona on the wall, despite that fact that the property no longer belongs to the footballer’s family.

The star, who had surgery for a subdural haematoma a few weeks ago, died at his last home on the outskirts of Buenos Aires, according to Argentinian media.

A subdural haematoma is a serious condition where a blood clot develops between the skull and the surface of the brain. It is usually caused by a head injury.

‘Diego Maradona’s biggest battle was always with himself’

Maradona was also admitted to hospital recently because he was “not well psychologically”, described as being “very sad” and not wanting to eat.

Please use Chrome browser for a more accessible video player 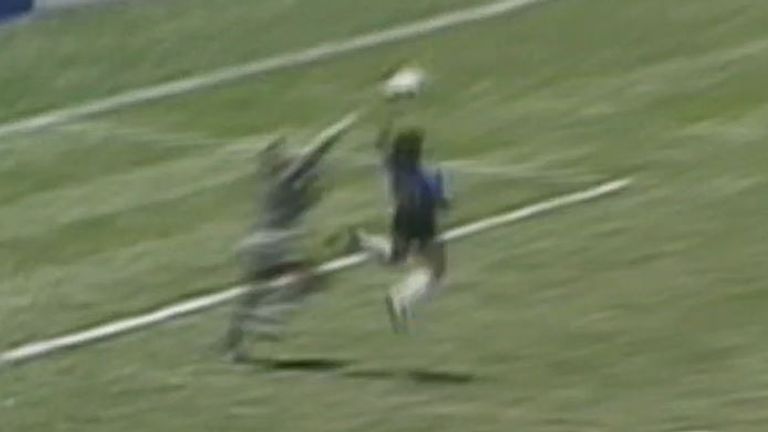 As well as the World Cup triumph in 1986, when Argentina beat West Germany in the final, Maradona also led his country to the final of the Italia 90 tournament, and managed them in South Africa in 2010.

His international playing career ended after he failed a drugs test at the 1994 World Cup in the United States.

He was also banned from football in 1991 after testing positive for cocaine while playing for Italian side Napoli, where he won two Serie A titles.

His “Hand of God” goal against England in the 1986 quarter-finals – when he pushed the ball into the net with his hand – was followed by a remarkable solo effort, in which he dribbled past half the England team.

Just 14 years later, the man born in a shanty town on the southern outskirts of Buenos Aires – the fifth of eight children – nearly died of cocaine-induced heart failure.

In 2005, he had a gastric bypass operation to lose weight, and was treated in 2007 for life-threatening alcohol-induced hepatitis.

NO CHANCE: No interest from Liverpool in Sergio Ramos

A Nasarawa United win in Owerri against Heartland FC

We have recorded substantial gains in fight against human trafficking in...

Nurses Protest Over Lack of Medical Equipment in Enugu State

Death toll of strange disease rises to 30 in Delta

Obaseki reiterates call for solidarity, common will to combat pandemic