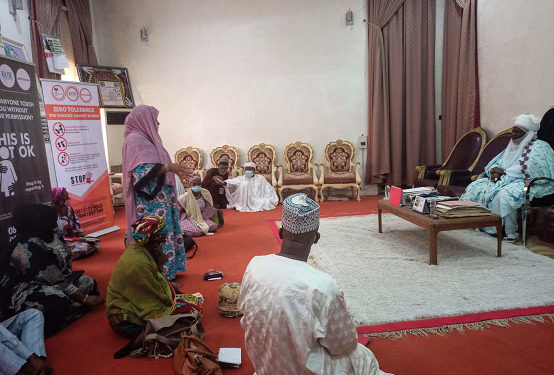 •A delegation from the Foundation during the visit to the Emir

When Ummi Usman (not her real name), a native of Makagi in Agaie Local Government Area of Niger State, refused to marry the man her family chose for her, her parents sent her to a strong room meant to hold stubborn girls like her. She was kept in the room for more than a month and tortured. According to her, four men were made to hold her while the man who she rejected as her husband would have sex with her repeatedly until she agreed to the union.

She said though she was fortunate not to get pregnant from the forced intercourse, other victims of the strong room got pregnant and this made them to eventually marry the man they rejected.

Ummi is one of the survivors of Gender-Based Violence (GBV) that is increasing daily in Niger State. She was able to escape, and is in Minna, the state capital, staying in a safe house for victims of gender-based violence.

The Chief Executive Officer (CEO) of Raise Foundation, Mrs Toyin Dawudu, expressed dismay over the primitive ways girls were forced to marry in the community.

Speaking to The Nation during one of the foundation’s advocacy visits to the Emir of Minna, Alhaji Farouk Bahago under its Women-led Integrated Protection Against Gender-Based Violence (WIPe-GBV) project, Toyin said: “I have heard and seen a lot of things but this is the craziest. Imagine, this community would force girls into marriage and when they refuse, they lock them inside these rooms. She will be kept inside the room for days and given something to drink. Then they would bring men to hold her while the man she rejected would be made to forcefully have sex with her. This will continue until she gets pregnant.

“It is very outrageous and primitive. Who does that these days? But this community have refused to stop despite calls and warnings from traditional and state leaders in the state. We learn that people from other communities and local government areas bring the girls who refuse to marry their parents’ choice of husband to the village for the same treatment.

“There is a joke in Zone A in Niger State that this community have the methodology to change the mind of anyone stubborn girl using this strong room. So, if you have a stubborn girl, take them there and they will help you.”

The wife of the Niger State Governor, Dr Amina Abubakar Bello, has set up a Safe Shelter for victims of gender-based violence.

Nearly 3 in 10 Nigerian women have experienced physical violence by age 15 (NDHS 2013). A three-bedroom flat had been built as a safe house but was abandoned for a long time, only to be renovated by Raise Foundation, a Foundation of Dr Bello.

The CEO of RAISE Foundation said the safe house is meant to safeguard the lives of victims of gender-based violence from their perpetrators and help them in the healing process of their abuse.

So far, eight residents have been admitted into the safe house and they are recuperating after facing various types of abuses from forced marriage to wife battering to rape and child trafficking.

“Because of the need to keep victims of gender-based violence safe from their abusers, Raise Foundation renovated a safe house for the victim. The operations are under the ministry of women affairs.

“The safe house came to be because we realised that it is not okay for someone who has been abused and is still being abused to return to where she has been abused. We noted the need to remove the survivor from the abusive environment as a change of environment is part of the healing process,” the CEO said.

The safe house would also counsel them, give them medical care, and empower them with various skills.

The Foundation is partnering with Action Aid and the British International Council as part of ongoing efforts in addressing issues of violence and abuse against women and girls.

The Director-General, Gender and Domestic Violence Department of the state Ministry of Justice, Mario Mann, said that the wife of the governor was concerned about the rise in gender-based violence in the state and was trying her best to bring an end to it.

She said: “The safe house which is the initiative of the Governor’s wife with collaboration with the Ministry of Justice and Ministry of Women Affairs is a temporary place where we keep the women and equip them with skills for her future.”

Muhammed lamented that despite efforts to stem down the cases of gender-based violence, it is still growing at an alarming rate because a lot of people are trying to hide and silence the incidents.

The Director-General, Niger State Child’s Right Agency, Mariam Kolo, identified reporting of cases of violence as the first step towards proffering solutions to the menace, charging traditional rulers to provide a conducive environment for women to report cases without the fear of the society’s backlash.

“Our appeal is for the traditional rulers to make it easy for victims of abuse to make themselves known. Let them know that they have the right to seek help and also, the community should assist them in doing so,” she appealed.