Arguments and scuffles have broken out in Armenia’s parliament as protesters angry at a ceasefire deal with Azerbaijan seized control of its chamber to denounce the country’s leadership.

Hundreds of people stormed the building in the capital Yerevan after Prime Minister Nikol Pashinian ordered an end to six weeks of fighting with Azerbaijan over the Nagorno-Karabakh region.

Mr Pashinian said on Facebook that he signed an agreement with the presidents of Azerbaijan and Russia to halt the fighting that has raged since late September.

The defence ministry of the Nagorno-Karabakh region said on Tuesday it had suffered 81 more casualties, taking its military death toll to 1,302 since fighting erupted on 27 September.

Mr Pashinian wrote that the decision was “extremely painful for me personally and for our people”. 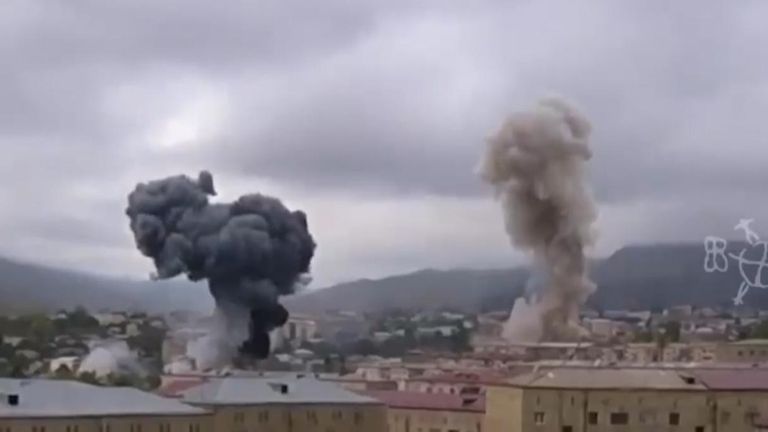 He added: “The decision is made basing on the deep analyses of the combat situation and in discussion with best experts of the field.

“We will never consider ourselves defeated and this shall become a new start of an era of our national unity and rebirth.”

Soon after the announcement, thousands of people streamed to Yerevan’s main square to protest the agreement, many shouting: “We won’t give up our land!”

Some of them broke into the main government building, saying they were searching for Mr Pashinian, who apparently had already left.

There were fights as protesters tried to take to the podium to speak and were shouted down, with some throwing bottles.

The AFP news agency reported that the few police present did little to prevent the disorder and people roamed the hallways, where doors had been opened and the contents of offices thrown about.

Meanwhile Azerbaijanis have been seen celebrating on the streets of Baku.

The Nagorno-Karabakh region has been under control of ethnic Armenian forces backed by Armenia since 1994.

The leader of Nagorno-Karabakh Arayik Harutyunyan said the ceasefire was unavoidable.

Russian President Vladimir Putin said in a statement that nearly 2,000 Russian peace keepers will be deployed along the front line in Nagorno-Karabakh following the agreement.

He said he hoped it “will set up necessary conditions for long-lasting and full-scale settlement of the crisis”.

Azerbaijan President Ilham Aliyev confirmed the deal has been signed.

The fighting had raised fears of a wider regional war, with Turkey supporting its ally Azerbaijan, while Russia had a defence pact with Armenia and a military base there.

Three ceasefires have failed in the past six weeks and Azerbaijan’s superior weaponry and battlefield gains had reduced its incentive to seek a lasting peace deal.

Analysis: Anger in Armenia suggests PM may not be part of talks for much longer

Armenia won the last war with Azerbaijan over Nagorno-Karabakh in the early 1990s but it has lost this one.

With the capture over the weekend of Shushi, or Shusha as the Azerbaijanis know it, the game was up.

Shushi is the second largest city in Nagorno-Karabakh and of huge symbolic value to the Azerbaijanis as the old centre of the Azerbaijani community during Soviet times.

Strategically, it sits on a hill above the main city of Stepanakert which was evacuated of civilians on Saturday – a clear sign of how weak Armenia’s position was after six weeks of fighting.

Azerbaijan had the upper hand militarily and was buoyed by at the very least the moral and technical support of Turkey, even if the Turkish president denied any actual military involvement.

That allowed President Aliyev to make significant inroads in and around Nagorno-Karabakh, including the territories it lost during the war in the early 1990s and from which hundreds of thousands of Azerbaijanis were forced to flee.

It is the first time peace-keepers have been deployed to keep the two sides apart and those Russian forces will be key to making this truce hold.

Azerbaijan’s president wants Azerbaijani refugees to return to their old homes and has guaranteed peaceful co-existence between communities.

The Armenians fear ethnic cleansing. As the scenes of anger and jubilation in their respective capitals show, the hatred between these two peoples runs deep.

There is still a lot more talking to be done before this long-running conflict is resolved even if, for now, the guns have fallen silent.

The anger in Armenia suggests Prime Minister Nikol Pashinian may not be a part of those talks for that much longer.